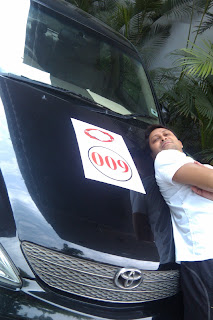 If life is sum total of one’s experiences, this one really enriched my life. It was a phenomenal experience, going across this entire route in just about 34 hours of drive time. Going through the terrain of fields, forests, ghats, perfect world class highways and completely mud tracks …. For me, the navigator of the team, it was still easy but I can completely appreciate what a challenge it would be for the drivers. There are some credits I want to personally accord post this event.

1)      Toyota Camry, the super car. It took all the bumps, shocks, continuous drive for over 24 hours without switching off the engine even for 10 minutes. Infact complete surprise to me was that there were 2 XUVs and both broke down. One had a steering jam and the other one had reverse gear failure. Even cars like Skoda Laura, Polo and Cruz suffered serious breakdown issues. And the little NANO on the rally completed the rally.

2)      Karnataka terrain – It was a beautiful countryside that the rally went through. Drive from Shimoga to Ankola was beautiful. Crossing ghat mountains multiple times was quite a challenge. Drive through the mountains of Someshwar was one of the most exciting, most scary and most challenging that I have been through. Hair pin bends like I had never seen before. At one hair pin bend, our car couldn’t take the full turn and stopped and a lorry climbing right behind us, stopped one inch or so behind us. My breathing halted for a moment. Very fine maneuvering of the rather big car on the rather narrow road, saw us through. Stretch of Bijapur to Jevergi was one straight road, running straight for kilometres altogether. Stretch from Dharward to Belgaum on NH 48 was brilliant.

3)      Lorry drivers on the highways – I was really impressed with decency and discipline with which lorry drivers drive on the highways. On the entire stretch, not a single lorry driver tried over taking or tried stopping cars from over taking them. They decently gave way, using indicators for the same. Infact, during night driving, they even dip their headlights when a car approaches from the other side. There was no fight, no lack of discipline, no rash driving. Cars and busses are not half way as decent as lorry drivers are. It is such decency on the part of the biggest driving segment on roads that made the drive such  pleasurable experience.

4)      Hira Motors – On the whole, I really want to congratulate Hira Motors on planning and executing this project. It was a brilliant idea to cover the terrain of Karnataka on a rally like this. It was overall very professionally managed. The detailing in terms of maps, check points, marshals, mechanics on call, stay food and beverages arrangements was very professionally delivered. Thanks to Imran and his team on delivering this event completely brilliantly.

5)      Last but not the least, super driving by Sujay. While probably Sujay was the best driver, many drivers were very good. Good driving is not about aggression, fast driving, over taking other vehicles. It is about control. About control to be able to use your car the way you want to without so much as hurting a stray piglet on the road. Very well done, drivers.

I hope to be able to go for more such trips.

Shubhra Misra
Posted by azresearch at 3:16 AM