Birth of the Cinema

It is common knowledge that cinema was "invented" in 1895 and that the first cinema shows took place in that year. However, several persons have been credited with having invented the cinema. Edison in America, William Friese-Green in UK, the Lumiere brothers (Louis and August) in Paris, Skladanowsky in Germany. This should alert us to the fact that the concept of the invention of cinema is problematic. If there is no one inventor, was there an invention at all? 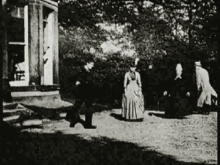 There is a story, probably apocryphal, that Louis Lumiere, the French inventor, was working on an apparatus which would take still photographs of phases of a movement at a certain speed and then would show those still photographs at the same speed so that an illusion of continuous movement is created in the mind of the viewer. Lumiere was not successful. Naturally it became a headache of sorts and he went out for a walk. He chanced to see a woman at her sewing machine. Lo and behold! The stop motion mechanism of the sewing machine would drive the cinecamera and the cine-projector. We may assume such anecdotes for Edison in New York and his fellow scientists in England & Germany too. To be precise, several people were working on a device to photograph and reproduce movement in and around 1895. The development of the cinecamera was a breakthrough indeed, but it was also the culmination of a long evolution. The urge to create a living image of reality was implicit in man's earliest magic and earliest art - and we can trace back the ancestors of moving pictures as we know them for more than a century before 1895.
Of course, from a certain approach to history, it is convenient to ascribe inventions to particular persons. This gives the impression of mastering history. Also, equating the "invention" of cinema with the development of the cinecamera makes it possible to assign a birthday to the cinema, an important element in history. This may appear innocent, but it isn't. For if the invention of cinema is limited to the making of a special apparatus to take and show photographs, that is, the cinematograph, then the cinema itself is reduced to a technical apparatus. But when we talk of cinema, we mean much more than just a machine. We do not go to a cinema hall to see a machine, nor primarily to experience optical tricks. We go, mainly, to see a story. And cinema turns out to be an art and a language. Based on an instrument, yet, much larger and complex than the instrument itself. Ask rather, "When was cinema language invented?"
Secondly, the cinema shows of 1895 were not the first shows of moving pictures. They were only more developed shows. From the end of the eighteenth century, and with the spread of the cheap printing, people increasingly came to look at images for their knowledge of life. The rational spirit of the age produced a passion for visual shows and exhibitions of all kinds. The ancient oriental shadow show enjoyed a great revival of popularity all over Europe in the 1770s and the 1780s. There was a great fashion for entertainments which combined painting, theatre, and light.
The association of cinema's birthday with the first film shows emphasizes the fact that, whatever else cinema could have been and hardly ever was, cinema happens to be a spectacle, an entertainment, and a business. Despite this, cinema manages to be an art. This suggests that, after all, technology, business, entertainment, and spectacle may not be as antagonistic to art as they are held to be. Moreover, since story telling started much before the so-called invention of the cinema, what was new when the cine-camera was perfected? It was a new manner of generating and conveying stories. And after the years 1895 to 1900, the real invention of the cinema took place, that is, the perfection of the skill to use the new apparatus to convey stories.
Wriiten by : Amit Patra
Posted by azresearch at 9:52 PM